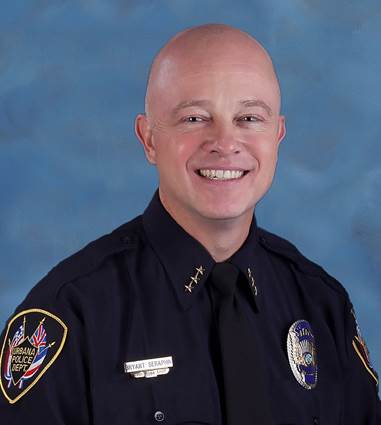 Urbana Mayor Diane Marlin praised Seraphin's many years of service to the community and highlighted a number of accomplishments during his tenure as Chief.

"Chief Seraphin has brought a wealth of knowledge and stability in his 27-year history with the Urbana Police Department. The relationships he has built within the community and with neighboring jurisdictions have been invaluable," Marlin said. “Chief Seraphin has brought positive, supportive, and energetic leadership to the City of Urbana. We thank him for his dedicated service and wish him and his family the very best as they begin their next chapter."

A NEW LEVEL IN THE DEPARTMENT

Marlin noted that during Seraphin’s time as Chief, the department implemented the use of body-worn cameras, including an upgrade of and integration with the squad car cameras. Seraphin coordinated with the Urbana School District to implement a full-time school resource officer program with an Urbana officer assigned to both the middle school and the high school. Under his direction, the department adopted the NAACP/Illinois Association of Chiefs of Police Ten Shared Principles and completed a full revision of the department's Use of Force Policy. Most recently, the department launched a follow-up Crisis Co-Responder Team in partnership with Rosecrance. This program provides a licensed social worker and a behavioral health detective for follow-up social services to persons experiencing a behavioral health crisis.

"Becoming the Chief of Police was never part of my original plan. I simply took the first police officer job I was offered at twenty-two years old, and that was here in Urbana. Then, life happened, and I was able to build a career that included successes and failures, ups and downs. I would like to thank the Mayor and this community for their faith and trust in me," Seraphin said. "I am proud of how far we've come as a profession in the last quarter of a century. We are so much further ahead when dealing with mental health issues, both in our interactions with citizens and within the walls of our police department with our own employees. As long as we treat each other with grace and respect, we can continue to move forward in a positive way," he concluded.

Chief Seraphin began his career with the Urbana Police Department as a police officer in 1994. He was promoted through the ranks to sergeant (2002 – 2007), lieutenant (2007 – 2017), and Deputy Chief (2017 – 2018), before being appointed Interim Chief of Police in 2018. He was appointed as the permanent Chief of Police in 2019. He holds a Bachelor degree in Sociology with a concentration in Criminology from the University of Illinois at Urbana-Champaign.

Mayor Diane Marlin intends to appoint Deputy Chief of Police Richard Surles as the Interim Chief of Police upon Seraphin’s retirement in March. Deputy Chief Surles has served the City of Urbana for approximately 25 years. Surles began with the Urbana Police Department in 1997 shortly after graduating from the University of Illinois at Urbana-Champaign with a Bachelor degree in Sociology with a concentration in Criminology. During his career, he has worked as a patrol officer (1997 – 2002), detective (2002 – 2007), patrol sergeant (2007 – 2010), patrol division lieutenant (2010 – 2015), and criminal investigations division lieutenant (2015 – 2019) until he was appointed the Deputy Chief of Police in September of 2019. Deputy Chief Surles is a graduate of Northwestern University School of Police Staff and Command and the University of Illinois’ Gies College of Business earning a Master of Science in Management with specialization in Business Value and Project Management.

“During the nationwide search and the following transition period, I am committed to ensuring that the Urbana Police Department continues to maintain their high level of service to the community, and I look forward to working with members of the police department, city staff, and community partners and collaborators through this process and into the future. I would like to personally thank Chief Seraphin for his many years of professional service and for the important guidance he has provided. My sincere hope is that he enjoys a satisfying and well-deserved retirement” said Surles.

The City of Urbana will initiate a nationwide search to recruit a new Chief of Police as soon as possible. Deputy Chief Surles has indicated that he will not apply to be a candidate for the permanent Chief of Police position.

More information related to the nationwide search will be shared with the public when it becomes available.