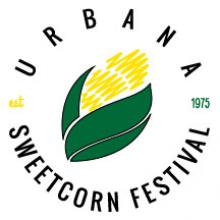 The Urbana Sweetcorn Festival is going back to its local roots.

Paris Baldarotta says she’s been thinking about ways to make the event more local for years, even before she was hired as executive director by Urbana Business Association in October 2015. The UBA organizes the festival.

“It occurred to me before I ever started at UBA,” she said. “When I attended, I wondered ‘Where are the local businesses and vendors?’ There were a lot of carnival vendors.”

This year, the local emphasis is front and center for the Aug. 25-26 festival.

Instead of tired headline bands that had a hit song or two in the 1980s, the Sweetcorn Festival this year will feature popular local bands as headliners, including the Boat Drunks from 9:30 to 11 p.m. on Friday night (Aug. 25) and Candy Foster and the Shades of Blue from 10:15 to 11:15 p.m. on Saturday night (Aug. 26).

Another musical highlight will be the Tons O’ Fun performance from 8:30 to 9:45 p.m. Saturday (Aug. 26), along with a special preview performance by ELLNORA guitar festival at Krannert Center. Tons O’ Fun plays “hot horn-driven rockin’ rhythm and blues.”

Alcohol sales will be different this year, with more emphasis on Urbana bars. Instead of just buying beer from outdoor stands, customers can also purchase a special Sweetcorn Festival plastic cup for $6 and then go into one of nine different downtown bars and purchase beer, wine or a mixed drink and legally take it back outside.

The number of outdoor beer stands will be reduced this year and sales limited to evening hours. Attendees who want an earlier drink will need to patronize the downtown bars.

“Carnival vendors come in, take all of our money and leave the community,” said Baldarotta. “We need to support our local acts and businesses and have our money stay in the community.”

The local emphasis is going over well with Urbana bar owners and managers, many of whom will also be offering live entertainment.

“We already do well with Sweetcorn Festival, but I think we’ll do even better,” said Ben Manns, general manager of Bunny’s Tavern. “She (Baldarotta) is trying something different, which desperately needs to be done.”

Manns also said he was pleased that the main stage will be moved to near where Main Street and Springfield Avenue split off, instead of in the east parking lot of the Champaign County Courthouse. The Folk & Roots stage will be on Broadway Avenue just north of the Post Office. 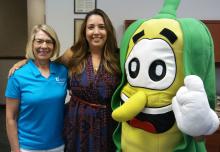 Another new event -- and sure-fire highlight -- will be the Corn Classic Corn-Eating Contest on Saturday. Men and women will compete to see who can eat the most ears of corn over five minutes; kids will compete for three minutes. The corn-eating contest will take place Saturday near the corner of Main and Walnut streets, with kids competing from 1:30-2 p.m.; women from 2:30 to 3 p.m. and men from 3:30-4 p.m. Contestants must register between noon and 1 p.m. at the Corn Classic Booth near the corn tent. The registration fee is $10 for adults and $5 for kids.

Festival organizers expect to sell 20,000 ears of buttered corn, which will cost $1 each. About 50,000 people are expected to attend the two-day event, which began in 1975.

More information can be found at www.urbanasweetcornfestival.com