Dade is a native of Quincy, Illinois. Years ago, he was working as a welder when his cousin suggested they go and take the firefighter test. The rest is history.

Dade served on Quincy Fire Department for over 21 years, with 11 years of experience as a Company Officer. In January of 2020, Dade was promoted to Deputy Chief of Administration; in that role, he created Quincy Fire Department’s COVID-19 policies and formed a Joint Task Force to address Civil Unrest Response comprised of representatives from the Quincy Police Department, Adams County Ambulance Service, and the Adams County Emergency Management Agency, among others. He also took an aggressive approach to creating and implementing the department’s annual training program; he created professional and career development plans, and in general helped to develop individual firefighters and increase their productivity.

He served as President of MABAS Division 44, and is currently a member of the Governor’s Fire Fighting Medal of Honor Committee. Dade is also a Field Staff Instructor for the Illinois Fire Service Institute at the University of Illinois, where he has promoted through the Instructor ranks in a short period of time due to his outstanding teaching skills, leadership, and dedication to the fire service.

Even with all the time and effort Chief Dade committed to his department, he still found time to give back to his community through teaching, mentoring, and coaching. For a collective total of 23 years, he served as the Varsity Girls’ Basketball Coach and as the Assistant Football Coach at Quincy Junior High and High Schools. Dade holds an Associate’s degree in Applied Fire Science from John Woods College.

It is apparent that being a Firefighter has fanned the flame of compassion for the community in Chief Dade. He also encourages others to look into the fire service.

"It doesn't matter what your background is. You can be a firefighter," Dade said.

Here is a video featuring Dade that was produced by Illinois Office of the State Fire Marshal in celebration of Black History Month.

The City of Urbana is looking forward to Dade using his leadership, collaboration, and administrative skills to help advance the mission of the Urbana Fire Department. He hopes to ignite interest in the fire service in Urbana.

Top Photo: Demond Dade as an instructor with the Quincy Fire Department. Photo courtesy of the Office of the Illinois State Fire Marshall. Bottom Photo: April Smysor of the Urbana Fire Department 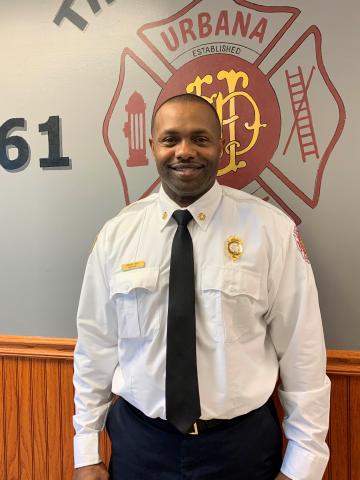