Interested in Urbana's Greek houses and the R-7 project? Take our survey!

The R-7, University Residential zoning district is intended to provide areas for dormitories and rooming houses near the University of Illinois, and to insure the longevity, architectural character, and use of the existing buildings in the district. While the R-7 district is intended to help preserve unique, older buildings used for student housing, the zoning regulations often make reuse, and in turn, preservation of those buildings more difficult. Housing demand from students has been changing for some time, and it has become more difficult to get students into the old group houses and Greek houses that make up the R-7 district.

In 2019, Landmarks Illinois included Greek Housing at the University of Illinois, Urbana-Champaign on its list of the “Most Endangered” historic places in Illinois. While the R-7 regulations have likely insulated Urbana from old Greek houses being torn down and replaced with new structures, they do not provide a path to preserve these important historic buildings.

Planning staff have begun exploring potential changes to the zoning regulations that would help ensure the long-term viability of the existing buildings in the district, while also providing more options to reuse the old fraternity, sorority, and rooming houses that make up the district. 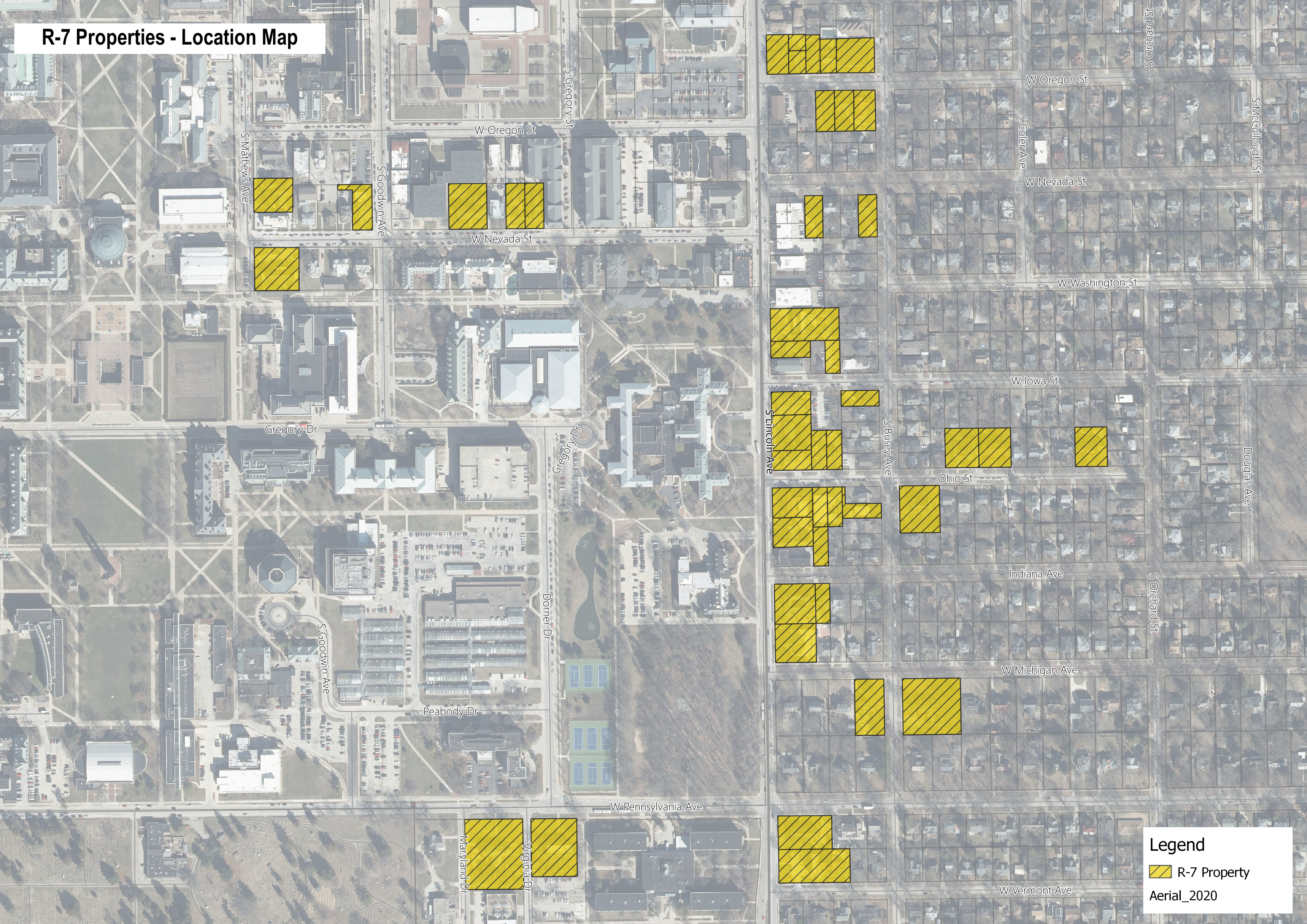 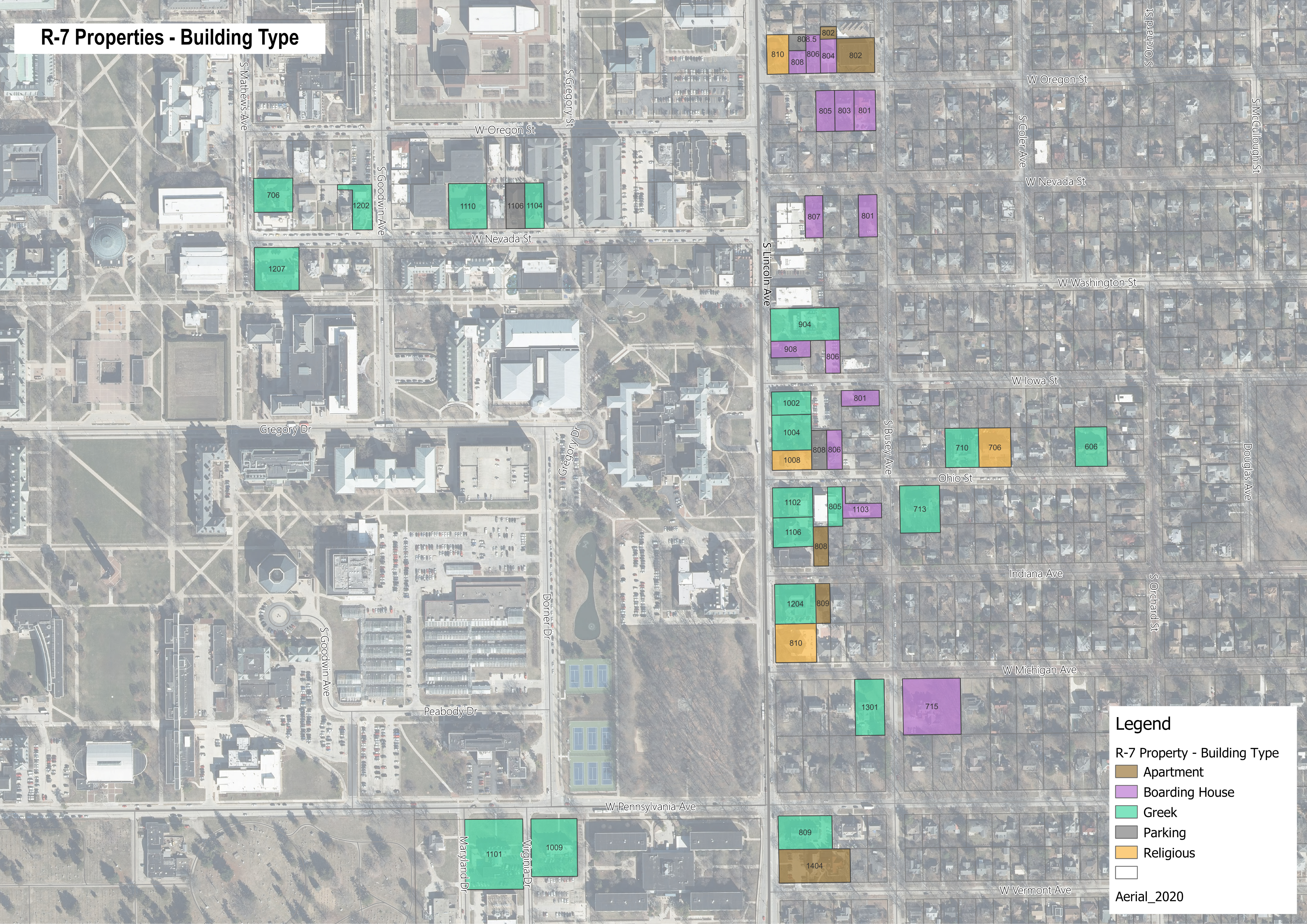 In late 2020 and early 2021, Planning staff surveyed R-7 property owners to get a better understanding of potential challenges they face under current zoning regulations. The survey asked whether property owners had experienced difficulties with zoning or other restrictions of the R-7 district. The survey also asked property owners to report whether or not their buildings were fully leased now, or were fully leased prior to the pandemic. Several property owners said that it is difficult to rent boarding houses as built, because students are less interested in living in larger group housing with shared bathrooms than they were in previous decades. There seems to be some owner-interest in renovating existing buildings for apartment uses; however, there is also some concern about whether renovations would be financially feasible.

On July 8, 2021, staff brought the topic of making changes to the R-7 zoning district to the Plan Commission for a study session. Staff suggested allowing existing buildings to be renovated as apartments, or potentially limited commercial uses, while continuing to discourage demolition of existing buildings. The Plan Commission was supportive of reusing the existing buildings, but voiced some concerns about whether it would be financially feasible to do so. They suggested that changes to the zoning regulations could be considered based on the use of buildings (group house, fraternity/sorority, etc.), rather than making universal changes to all parcels in the district. They suggested that text amendment could be approached in different ways. A recording of the Plan Commission meeting can be found here: https://urbanaillinois.us/node/9326

On October 12, 2021, staff hosted a virtual neighborhood meeting to hear from people in the West Urbana Neighborhood (where all of the R-7 properties lie). There was a great deal of concern about parcel combinations, and how combining parcels in the R-7 district would allow for larger buildings to be built that would be out-of-scale in the neighborhood. There was also consensus that the neighborhood would like to see the existing buildings preserved as much as possible. Many people who attended the meeting also requested additional neighborhood meetings to discuss proposed changes to the R-7 zoning regulations prior to the Plan Commission meeting where any changes would be considered. A recording of the neighborhood meeting is linked here: https://www2.city.urbana.il.us/_Video/Features/2021/R-7_Text_Amendment_2021.mp4

Based on feedback we have received from the survey, study session, and neighborhood meeting, staff drafted a series of potential changes to the zoning ordinance for consideration. On December 14, 2021, staff hosted a second virtual neighborhood meeting to discuss the draft alternatives for the R-7 district. There was a general consensus that buildings and properties in the R-7 district should be treated differently, based on current and historical uses. There was concern about out-of-scale development along the state streets of West Urbana. Following the neighborhood meeting, staff is welcoming written comments in response to the draft alternatives.

The R-7 zoning district contains all of Urbana’s historic and architecturally-significant fraternity and sorority houses. As such, staff is seeking input from the Historic Preservation Commission on these zoning changes. On February 8, 2022, staff brought the topic of making zoning changes to the R-7 district to the HPC as a study session. The HPC was in support of zoning changes that would help promote the preservation and reuse of Greek houses in the R-7 district. A recording of the meeting is posted on HPC meeting page here: https://urbanaillinois.us/node/9962

On March 29, 2022, staff hosted a fourth virtual meeting to discuss the general approach to the text amendment, and the types of uses that would be allowed in existing fraternity, sorority, and rooming houses in the R-7 district. A recording of the neighborhood meeting is linked here: https://urbanaillinois.us/node/10026

The "Greek House" R-7 text amendment will be presented at the Plan Commission meeting on Thursday, April 7th at 7:00pm in the Urbana Council Chambers. The staff report and more information about the meeting are posted on the City of Urbana's website here: Plan Commission Meeting April 7, 2022 - 7:00pm | City of Urbana (urbanaillinois.us)

Please contact Kat Trotter at krtrotter@urbanaillinois.us with any questions!