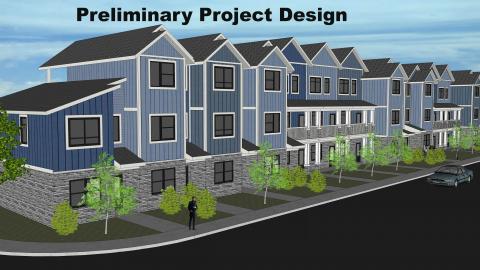 The City of Urbana and Green Street Realty have entered into a Letter Of Intent for the redevelopment of the 200 block of South Vine Street in Downtown Urbana.

Mayor Diane Marlin noted that this project will be the first new residential construction in downtown Urbana since 2005, when the Stratford Residences were built.

The proposed townhome-style development contains 42 two- and three-story units. The townhome units would include a mix of two and three-bedroom floor plans, with some that could be adapted for handicapped accessibility. A number of units also include private garages.

“Downtown Urbana has seen many positive changes in recent years,” said Chris Saunders, owner of Green Street Realty. “We are excited to be part of this momentum and are eager to provide a new housing product to the Urbana market.”

Check out the open house video.

Comments on the proposed project may be emailed to: leasing@greenstrealty.com.