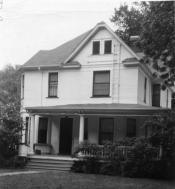 This building was orginally constructed in 1870, the Princess Theatre alteration occured in 1915, and the art deco facade was added in 1934. This was one of the first brick buildings built in Urbana and was one of the most popular opera houses in Urbana.  For more detailed information see the Busey's Hall/Princess Theater Local Landmark Application. 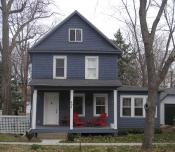 The Ezekiel Boyden Home is the only documented building in Urbana that Abraham Lincoln visited. There is evidence that Lincoln stayed overnight as a guest in the house of Ezekiel Boyden, a two-time mayor of Urbana, on September 24, 1858.

John Colvin, proprietor of a meat market in downtown Urbana, built the house at 604 W Pennsylvania Avenue in 1922. Architecturally, the house is a mixture of Prairie and American Four Square architectural styles with Colonial Revival elements. The house form is similar to that of an American Four Square, two stories and two bays wide and deep. It differs from an American Four Square with a one-bay wing on the east elevation and an attached two-car garage on the west elevation. The roof is a low-pitched hipped roof with wide overhanging eaves, which is typical of the Prairie architectural style. Other features typical of the Prairie style include the brown brick, the asymmetrical façade with a raised terrace to the side, and limestone sills which provide a horizontal emphasis. The front entrance contains Colonial Revival elements, with a decorative crown extended forward and supported by columns to form an entry porch. The front door has a fanlight above it, which is also typical of the Colonial Revival style. The line of the decorative crown at the front entrance is repeated in the dormer.

Gus Freeman, owner of Urbana’s first movie theater, the “Princess”, had this Classical Revival house built by Edward Benton from the design of architect Joseph Royer in 1902. It is an excellent local example of the Classical Revival architectural style and the only such example of this style in Urbana. The integrity of the house remains, although by the 1950s it had been converted into apartments. Although modifications have occurred over time, mostly in the conversion of the house to apartments, many of these changes are historic and have in themselves gained significance.
For more detailed information see the Freeman House Local Landmark Application.

This house was constructed circa 1855. It is one of the few examples of Greek and Gothic Revival architecture in Urbana and central Illinois. The house has maintained its architectural integrity and continues to display the original gingerbread trim, the pointed arch windows with hoodmold and other typical decorative work on the porch. The one-story porch features stylistic elements and are found in approximately eighty percent of Gothic Revival houses. This further supports the uniqueness of this house, not only in an architectural style uncommon in the area, but in having an element that is not present in all Gothic Revival houses.
For more detailed information see the Gothic Revival Cottage Local Landmark Application.

Eli Halberstadt, a prominent grain miller and four-term mayor of Urbana, built the house at 104 N Central Avenue in 1875. Architecturally, the house is an example of the Italianate and Stick/Eastlake architectural styles. The house form is a one-and-one-half-story, asymmetrical cross-wing plan with a lower kitchen wing at the rear. The roof is a steep cross-gable. The front porch has an elaborate display of architectural details (see attached photos). The exterior window and door trim on the house show fine detail and craftsmanship, as do the unusual diamond-shaped windows. The exterior of the house appears to have changed little since construction. The Sanborn Fire Insurance Map of 1892 shows the footprint of the house to be identical to that of today, with the exception that what was originally a back porch on the southeast corner of the house has been enclosed.

The building was constructed in 1895. The first floor served as commercial space for use such as a grocery store. The building was originally constructed in 1895. It retains its original features consistent with the Queen Anne architectural style. A local newspaper described the Lindley House as "a modern residence in every particular" and it was a preeminent example of "modern design". The main home and carriage house are exemplary of the Queen Anne architectural style. The house includes varied window type, a full-width porch with detailed decorative elements, and a gable roof among its features.

Dr. Austin M. Lindley and Mrs. Minnie Hubbard Lindley constructed the Lindley House. The Lindleys and Hubbards were prominent families in Urbana. Mrs Lindley's father was an alderman and among the first Urbana citizens. In addition, the architect of the Lindley House, Mr. Rudolf Zeres Gill, also served as Urbana City Engineer and City Treasurer from 1896 to 1898.
For more detailed information see the Lindley House Local Landmark Application.

Nathan C. Ricker constructed this house in 1892. It is a single family, two-story, wood frame house located on West Green Street, the main east-west corridoor from the University of Illinois campus to downtown Urbana. The house is located in a neighborhood comprised of late 19th and early 20th century single and multi-family housing. The south facade of the house faces Green Street, which is lined with several mature trees. The Ricker house is finished in the Queen Anne style, which is apparent by the irregular roof form, the many projecting bays, the exterior wall finishing, the front porch, and the windows. The exterior of the house is covered with wood clapboard siding and wood shingles.

Mr Ricker was instrumental in establishing the architecture program at the University of Illinois, which was the only architectural program outside of the East Coast until 1889. He was head of the department of Architecture and resided in this home during his more active years, between 1885 and 1912. He was responsible for developing inovative curricula at the Unversity of Illinois and was responsible for the design of many key University buildings. These buildings include Harker Hall, Kenny Gymnasium Annex, Natural History Building, Aeronautical Lab B and Altgeld Hall, which were added to the National Register of Historic Places in 1986. He was also innovative in his contribution to modern methods of natural lighting and ventilation systems.
For more detailed information see the Nathan Ricker House Local Landmark Application.

Chester W. Richards, Urbana Mayor from 1917 to 1919, and his wife Amelia owned a series of Craftsman inspired homes in Urbana. The Richardses built the house at 305 W High Street around 1911. It is a good example of a Craftsman style house, a style relatively uncommon in West Urbana. The home maintains a high level of integrity today. Although not relevant for landmark status, it must be noted that the interior of the home is well-preserved with exquisite wood floors, trim, and built-in cabinetry, typical of Craftsman homes.
For more detailed information see the Richards-Latowsky House Local Landmark Application.

James Elmo Smith, a three-term mayor of Urbana, civil engineer, and major local real estate developer, built the house at 801 W. Indiana Avenue in 1920. Architecturally, the house is influenced by the Craftsman movement. The heavy porches supported by chunky square piers, along with the 3-vertical/1 double-hung sashes suggest Craftsman. While the house is overall relatively unornamented, a slight influence of the Colonial Revival style is expressed through the gable roof dormers with full returns as pediments. On the east elevation, a two story semi-hexagonal bay is a holdover from the turn-of-the-twentieth century Queen Anne style. Although not relevant for landmark status, the interior of the home is well-preserved, with original wood floors, millwork, and windows. A complete historically-respectful renovation was accomplished in 2012.

The house was built in 1889 by Elizabeth Sutton, widow of R.A. Sutton, Urbana mayor (1874-75) and “Brick King of Champaign County.” It is an excellent local example of the Queen Anne architectural style and is one of the few remaining examples of this style executed in brick. It is also the only documented residential brick structure that exemplifies the masonry product produced at Urbana’s important Sutton-Sheldon Brick Yards. The integrity of the house remains apparent. Although modifications have occurred over time, mostly in the conversion of the house to apartments, many of these changes are historic and have in themselves gained significance.
For more detailed information see the Sutton House Local Landmark Application. 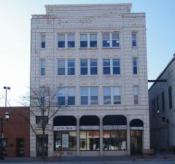 The building represents notable work of Joseph W. Royer, who designed the Classical Revival terra cotta facade of the building in 1914. Mr. Royer was an important area architect and Urbana citizen. He designed the County Courthouse, the Sheriff's Residence, the Urbana Free Library, The Urbana High School and the Urbana Lincoln Hotel. Mr. Royer's buildings listed in the National Register for Historic Places include; the Alpha Rho Chi fraternity house in Urbana, the former Chi Psi house in Champaign and the Franklin County Jail in Benton, Illinois.
For more detailed information see the Tiernan's Block/Masonic Temple Local Landmark Application.