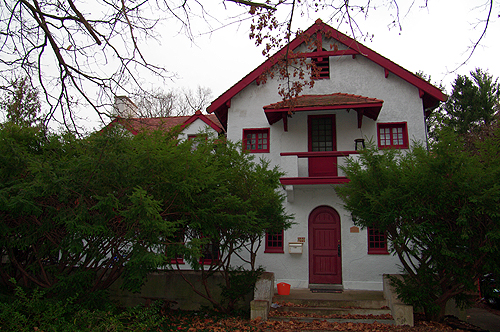 801 W. Oregon Street was the original residence of Joseph Royer, a prominent Urbana architect. 701 S. Busey Avenue was originally built by Royer as a "mother-in-law" cottage subsequent to the construction of the primary residence.

The structure at 801 W. Oregon Street was designed and built by Joseph Royer in 1905. The house was built in the Mission architectural style with an Arts and Crafts influence. The Mission style is more typically found out west in California or parts of the southwestern United States. It is believed that Royer was inspired to construct the home after seeing a similar type of structure at the 1904 Word's Fair in St. Louis called the "California Building." The home was built with a brick foundation and finished in stucco with a clay tile roof. The home contains an arched doorway on the prominent northward facing bay. Above the entrance is a balcony sheltered by a hip roof, also finished with clay tile. the north side of the home features a concrete terrace which extends eastward to an elaborate pergola. The rear of the home contains a kitchen wing in which the first floor is original, finished with stucco, and the second story, added in 1968, is finished with a modern wood siding. The property shares a gravel driveway off of Busey Avenue with 701 S. Busey Avenue to the south. Joseph Royer and his wife Adelaide finished construction of the home in 1906 and lived their until there deaths in the early 1950s. 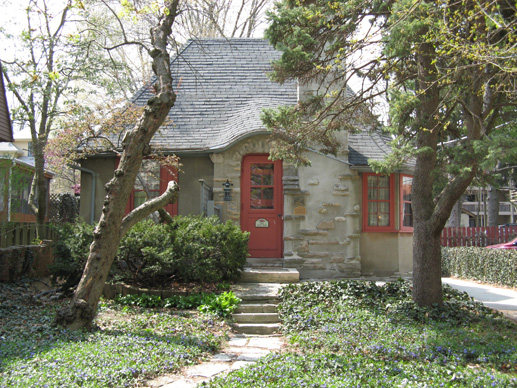 The structure at 701 S. Busey Avenue was also designed by Joseph Royer. Royer built the home in 1923 as a "mother-in-law" cottage for his mother-in-law, Ella Danely. The structure is often referred to as the "Danely Cottage" or the "Fairy House." The house was designed in the English Revival style of architecture and relates to 801 W. Oregon in the fact that it is also finished with stucco siding. The most important feature of the home is the arched, eyebrow entrance way and the chimney finished in stucco with randomly placed fieldstones. Today, the structure is in exceptional condition and well cared for. 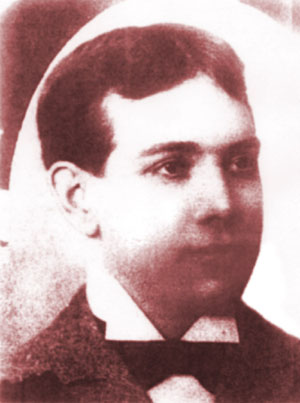 Joseph Royer is Urbana's most noted and recognized architect. Royer was an Urbana native and graduated from the University of Illinois in 1895 with a degree in civil engineering. He worked as the Urbana City Engineer from 1898 to 1906. During the time, Royer designed the historic Champaign Courthouse and the Sheriff's residence and Jail. In 1905, he formed his own firm and went on to design other well known Urbana landmarks such as Urbana High School (1914), Urbana Lincoln Hotel (1924), Urbana Christian Church (1910), Urbana Free Library (1918), Alpha Rho Chi Chapter House (1927), Urbana Flat Iron Building (1906) and the Urbana Country Club (1922) among others. Royer finished construction of the Ella Danely Cottage in 1923. Adelaide's mother resided in the home until her death in 1953. Royer continued to live at 801 W. Oregon Street and have a successful architectural firm in Urbana until his death in 1954.