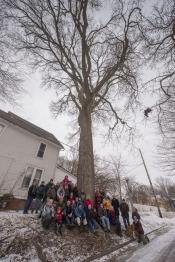 The beloved Sim Hackberry grew near a small stream west of Coler Street, draining north into the Boneyard Creek, as shown in the 1858 Bowman Map of Urbana. This tree stood 98 feet tall, rising from a massive columnar trunk measuring over 5 feet in diameter and 16 feet 3 inches in circumference. The tree divided into three main branches 25 feet above the ground and supported a canopy of leaves 98 feet wide.

Growing atop the sloping embankment of the parkway, this tree was notable locally not only for its gigantic size but also for the visible exposure of its extensive root system above the brick street. It has been estimated that this great tree was between 180 and 200 years old. It would have been a young tree when Abraham Lincoln came to the Champaign County courthouse in Urbana while practicing law on the 8th Judicial Circuit in the 1840s and 50s. This great tree is located on property once owned by Joseph W. Sim, a well-known Urbana lawyer, one time Mayor of Urbana (1864-66), and judge of the Champaign County Court (elected in 1873).

In 1986 supportive cabling was added on several limbs when weakened branch attachments were discovered. During the ice storm of February 14, 1990, a falling limb damaged the roof and second story of the house at 312 S. Coler, and additional cables were installed to anchor the tallest branches. An inspection of the tree in 2014 brought a recommendation that the hackberry be removed for safety reasons. Neighborhood support for this tree and interest in the recently adopted Legacy Tree Ordinance (April 11, 2013) led to the Sim Hackberry being honored posthumously as Urbana’s first Legacy Tree.

The tree is being processed by Autumn Mill in Argenta, Illinois, into wood to be used for other purposes.

Video 1: Autumn Mill
Video 2: Processing - and surprises inside
Video 3: Inside look at the tree's condition
Video 4: Redefining the meaning of big