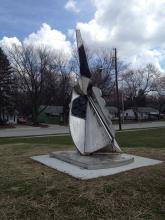 In July 2013, the City of Urbana Public Arts Commission and the Urbana Park District announced that Illinois artist Preston Jackson’s public art sculpture Byways to Equality was to be commissioned for King Park in Urbana. The sculpture was dedicated on April 19, 2014. Based in Peoria, IL. Two of his pieces are located in the area: Remembering Frederick Douglass at the Douglass Branch Library in Champaign and Animal Dignity on the south exterior entrance to the Animal Sciences Laboratory on the campus of the University of Illinois. Mr. Jackson created a 12-foot high sculptural piece inspired by the legacy and ideas of Dr. Martin Luther King, Jr. for placement specifically at King Park in Urbana. Fabricated of stainless steel and bronze, the piece depicts elements of the history of the Civil Rights Movement and Dr. King’s work. An important component of the sculpture is a fabricated stainless steel image of the Edmund Pettus Bridge, the site of events leading up to the signing of the Voting Rights Act of 1965 by President Johnson. The sculpture will also feature other identifiable images, such as the buses from the Montgomery bus boycott, the Birmingham Sixteenth Street Baptist Church, civil rights marches, and voting drives, all in bronze relief. Mr. Jackson sees this work as an opportunity to educate the public about Dr. King and “as a vehicle for our history, which will help people understand both our past and the related social issues.” Such artistic depictions of history will appeal to residents and visitors of all ages, creating an asset for the neighborhood and Urbana and honoring the legacy of Dr. Martin Luther King, Jr.

Preston Jackson is an accomplished artist (painter, sculptor, public artist) who has produced many public art pieces for cities in Illinois and has taught at the School of the Art Institute of Chicago, Bradley University, and Millikin University. He is currently Professor Emeritus of the School of the Art Institute of Chicago. "One of a family of ten children growing up in the small city of Decatur, Illinois, Preston Jackson became a storyteller and an artist at an early age. In his artwork he intends to deliver information about who we are, where we came from, and where we are headed. His training is in the field of metal fabrication, both steel and foundry cast metals, as well as in painting. The materials used most often in his pieces are cast bronze, steel, and stainless steel." Learn more about Preston and his work at: www.prestonjacksonart.com.

This project is part of the Urbana Public Arts Program, whose mission is to create a city where all residents may engage with the arts in its many forms, and where artists thrive and are valued.

Click HERE for a link to an article on Preston Jackson and the Byways to Equality sculpture- published in The News-Gazette, Sunday, April 13, 2014